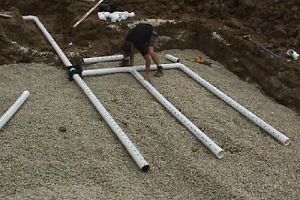 Household sewage systems utilizing a subsurface filter bed have been installed in Cuyahoga County for decades. For many years, these systems utilized gravel as the media through which the sewage would be filtered. Unfortunately, these older systems did not function well and did not have the ability to properly filter sewage prior to discharging an effluent to the environment. Modern filter bed systems now utilize state-approved filter sand as the filtration media. The sand has a filtration capability which is far superior to that of gravel. Filter bed systems were either installed totally underground (“at grade”) or mounded above the ground.

Likewise, most modern filter bed systems installed in the last twenty years utilize two individual beds separated by an earthen barrier. These systems use a “splitter box”, also known as a flow diversion box. This box contains a diversion device which directs the flow of wastewater to one side of the filter bed or the other. This allows one part of the bed to rest, while the other is in use. This may help extend the life expectancy of your filter bedsystem. The flow diverter should be switched to alternate flow once a year. If you do not know where your flow diversion box is located, contact your sewage system pumper, installer, or the Board of Health.

It is important to remember that a filter bed system is designed to treat waste water and then discharge treated effluent to an appropriate discharge point. 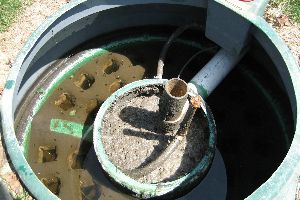 If you utilize an aerobic system, special care and maintenance is necessary. The motor that provides aeration to the system must operate continuously. If it does not, the oxygenlevel required by the microorganisms which thrive in the aeration unit will not be sufficient and they will begin to die. These “sewage bugs” help to break down the organic matter in the wastewater and biologically convert it to stable substances in the form of liquids and gases. The aeration and mixing of the wastewater insures that it comes in contact with the microorganisms so thorough treatment canoccur. Loss of suitable aeration will result in little or no sewage treatment taking place within the aeration unit. 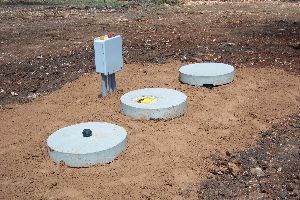 Several aerobic system designs also incorporate the use of filters to provide necessary treatment. They need to be checked and cleaned regularly. Aerobic systems also have mechanical components that will need to be checked and serviced regularly. Since some of the additional care andmaintenance required with these systems is beyond the expertise of the average homeowner, various companies have been certified by the original manufacturers to offer extended service contracts. These normally cover motors and other components which require maintenance. 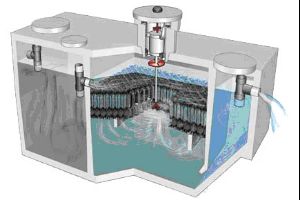 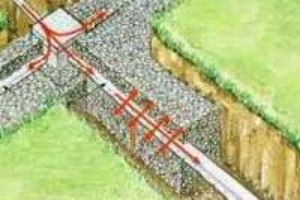 The typical household sewage system installed throughout the country for decades has utilized a septic tank and a leaching tile field. By design, the sewage flows from the tank to the leaching area where it drains from clay tile or perforated pipes laid in gravel trenches. The wastewater then enters the soil where it must be properly filtered, distributed, and absorbed so that it does not pose a contamination threat to groundwater. 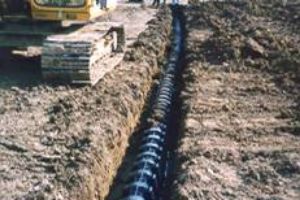 Leaching systems can function well in areas with well drained soils. Unfortunately, much of Cuyahoga County consists of poorly drained clay soils. These soils are often compacted and have very little absorption capacity. The soil permeability – the rate at which water percolates into the soil – is very slow. Poorly drained soils are typically saturated with water during wet weather and stay wet forlong periods of time after a heavy rain. Since much of the space between the soil particles is already filled with water, the effluent leaving the sewage system is forced to rise and collect on the surface of the ground causing foul-smelling and swampy conditions. Leaching fields installed in these soils can only function properly during periods of dry weather. Some local areas are also effected by very shallow bedrock. The thin layer of soil which covers the bedrock is insufficient in depth to support a leaching system. 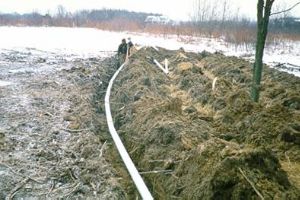 Leaching systems may need to be installed at a shallower depth due to shallow bedrock or elevated groundwater conditions. These systems are designed withwider trenches which utilize evaporation to the air and transpiration to grasses and plants to help dispose of the wastewater. These systems are often called E-T (evapo-transpiration) systems. Just like conventional leaching systems, they incorporate a distribution system of perforated pipes which disperse wastewater throughout a series of gravel trenches. A series of distributionboxes assist in evenly spreading the flow throughout all of the trenches in the system. These boxes have access lids to grade so that the proper distribution of wastewater can be regularly checked. 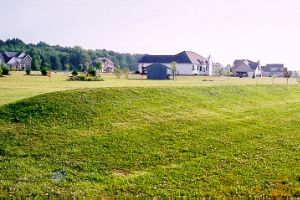 Another relatively modern sewage system which is currently being installed is a mound system. This design utilizes a soil absorption system constructed above grade. Sand fill is used to enhance treatment of the wastewater prior to entering the natural soil at the site. Sites that may be unsuitable for aconventional leaching system may be suitable for a mound system.

The mound system was originally developed in the early 1970’s in the State of Wisconsin. The system has been widely accepted across the United States, especially in areas with slowly permeable soils, shallow bedrock, or high seasonal water tables. 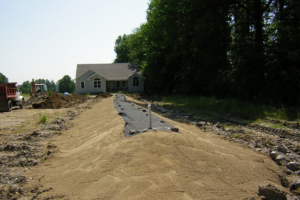 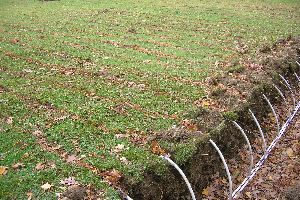 Drip Distribution Systems are installed very shallow in the soil, at the surface of the ground or on top of a bed of sand, depending on the specific limiting conditions on the property. The systems are pressurized to ensure the even distribution of wastewater into the soil.  They utilize small diameter tubing with pressure compensating emitters to apply wastewater uniformly over an infiltration surface. Drip distribution works on the principle of timed micro-dosing to maintain aerobic conditions in the soil. Timed micro-dosing applies effluent to the soil at uniform intervals throughout a 24-hour period, which allows for improved wastewater treatment. This pattern of application requires sufficientsystem storage to allow for occasional peak flows when water usage is heavy in the home. When properly sited, designed, installed and operated, drip systems can help overcome the typical problems associated with uneven wastewater distribution which often result in the surfacing of wastewater in the area over the distribution field, sewage odors and other nuisance conditions. 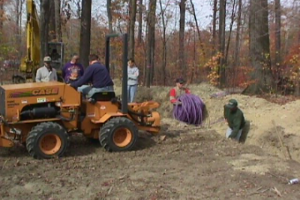